Blockchain and the shift of trust that Bitcoin proposed 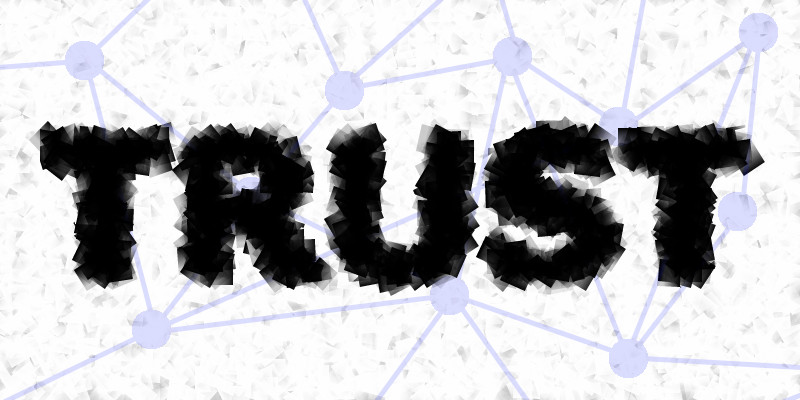 Blockchain (and Bitcoin first, of course) is often described as a technology that allows peers to transfer value between each other in a trustless way. However, “trustless” is not entirely accurate, but more like a convenient and short way of describing it. Truth is, there is still a lot of trust involved… but with a twist. Let me ramble on about that for a few minutes.

One of the groundbreaking changes Bitcoin gave us was a paradigm shift about where we put our trust when we transfer value digitally between each other (a key element in a decentralized system). And that value is, in many ways, money. Let’s analyze trust using money as our case study.

In which scenarios is our trust involved with our current financial system?

I won’t discuss in this article the history of money, its characteristics or the value each form of money has. Perhaps some other time, we’ll see.

Let’s break down each of the previous trust scenarios.

In our current financial system, the majority of the money is issued by the state (fiat money). All the well-known currencies like USD, EUR, GBP, or YEN are being issued by their corresponding governments or central authorities. Their issuance and their supply are subject to the monetary policies of such authorities. The only global form of money that in some aspects escapes the control of the state is precious metals such as gold.

Given the centralized nature of that system, we must put our trust into those authorities regarding their policies and hope that they decide well for our benefit.

The monetary policy of Bitcoin (and many cryptocurrencies) was defined at the beginning and included in the code itself, for everyone to see and verify. Bitcoins are generated in a decreasing manner, at an average of 10-minute intervals, until they reach a total of 21,000,000 Bitcoins issued. And that is all that will ever be (technicalities aside).

We don’t need to trust a central authority to decide how and when to issue more money, because the policy is already established in the code of the software we decide to run.

So, we can say that the trust on issuing and controlling supply shifted from central authorities to trust in the Bitcoin system/network, which we can always verify and eventually decide to use.

Given that one of the functions of money is being a store of value, we should have the capability of holding it. Holding cash or a small piece of gold is simple and you have total control over that. However there are some other kinds of money for which things are more complex, like the digital money we most likely use everyday.

When you have money on your bank account, you don’t really have 100% control over it. It’s controlled by the bank, and you just ask them to do certain operations with it. So you have to trust them to keep it safe, and to be able to do what you ask when you ask them to. The same happens if you use some other company like payment processors or gateways (like PayPal) to hold your money.

Moreover, if some authority ask the bank to seize your funds for whatever reason, they will need to do it. Then, again, you are trusting another central authority with its judgement regarding your money.

The Bitcoin way of owning money

In the crypto world, ownership comes in hand with cryptographic keys. To put it short, the only way to move your money in the Bitcoin network is by having the corresponding private keys to the addresses where the funds are locked in.

You don’t need to trust a third party with your funds to hold them for you. You just need to have the private keys associated with your funds, and it will cost you the same to have a small amount or very large sums of money. Moreover, no one can do anything with those funds unless you want to. Why? Because, again, you and only you know those keys.

So, we can say that the trust for holding our money shifted from banks and/or companies to ourselves and our capability to correctly store the corresponding private keys.

And what would be of money if it can’t be used in the economy by transferring it, right?

If you hand out cash, the transfer is instantaneous and you have total control over it. But you need physical presence to do so, which is why for remote transfer nowadays we turn to electronic/digital methods. Again, you rely on your bank, payment processor, or gateway to make that transfer on your behalf in a correct and timely manner because, before Bitcoin, there was no other way of transferring value without an overseeing third party. And since you don't have full control over “your” money in that case, there you go trusting again.

But you don’t only trust the institution that holds your money when you want to transfer it, you are also trusting other institutions (perhaps not even your own) when you send and receive funds as well. In the current system, such entities are the ones that check, among other things, that there are enough funds to be transferred, that those funds are not spent twice, and that the funds get to the corresponding recipient.

The Bitcoin way of transferring money

As we said, controlling your money with Bitcoin and similar cryptocurrencies will depend on you controlling your private keys. And, thanks to Satoshi Nakamoto (Bitcoin creator) and his solution to the Byzantine Generals' Problem, we are allowed to use those private keys to digitally sign transactions of money and send them over the network without the need of centralized third parties to control, audit, or verify that process. The same goes when you receive the money, where instead of trusting the sender you can just verify that the transaction is valid all by yourself.

By transferring money in a decentralized way, we shift our trust from third parties that usually enable those transfer for us, to a distributed system with mechanisms to ensure security and, in many cases, censorship resistance.

Even if centralization can have many benefits, which will depend on the observer, it also presents a few problems as you can guess. In every case, you don’t only rely on the good intentions of the entity you put your trust into, but also on their competency and suitability to handle your values and not make mistakes.

So, where is all the trust now?

Note that most of the times I said that you didn’t *need* to trust third parties to hold or move your funds, but you can do it if you want to. However, keep in mind that in those cases you are back in a scenario closer to the current system.

It’s important to make that distinction, because in the current system you don’t have an alternative but to trust third parties to hold, transfer, and operate digital money across the world. In the decentralized world you can do it if you want, but you don’t *need* to.

However, as we’ve been saying, this is a shift of trust. Trust doesn’t just disappear. If you engage in this new decentralized money system, you’ll find yourself still trusting… but different things. You'll find yourself trusting the hardware manufacturers of every computer, router, or “hardware wallet” you use. In a practical sense you'll probably also find yourself trusting the developers that created the software that you are using, because it's not that likely that you review the thousands of lines of code of the Bitcoin Core node/wallet, just to name one. It’s true that you still trust all of that with the current system but, due to its centralized nature, the real trust is put in the central authority because they “should” take responsibility and usually "should" solve your issues.

The key difference now is that most of the components involved in this decentralized system can be audited or reviewed by us. We have that power. We could argue that in many cases the required knowledge to check everything makes it practically unfeasible, and that is true. However, even in those scenarios, you still have the choice to invest the time and learn what you need, or decide in which competent person or group to put your trust to verify it. The open source philosophy provides many alternatives and gives us the final choice of putting our trust in the wisdom and vigilance of the world community.

All (or most) of the points exposed in this article apply to the Blockchain technology as well, not only to money (even if money is THE transferrable value).

Of course, shifting trust in this way also comes with a shift on responsibilities. By having more control over something, we also have more responsibility over it. That is something which is usually in a constant battle with convenience. And that battle can lead to a future in which not everyone will prefer control over convenience, and trust can still be placed in the usual actors. Also, we should not disregard the fact that implementing such a trust-shifting technology like Blockchain comes with associated costs: technological, social, and individual.

The shift of trust becomes a shift of paradigm if we think that most of our activities as a society rely on a central authority overseeing, authorizing, and controlling certain aspects of our interactions. But what would happen if those authorities have their responsibilities substantially reduced or even vanished altogether? And if we think that this could happen in the near future with money, one of the greatest (if not the most important) social constructs of humanity, a new world might be awaiting.

Do you agree? What do you think about trust?
I'm more than happy to get your feedback. Contributions are welcome.