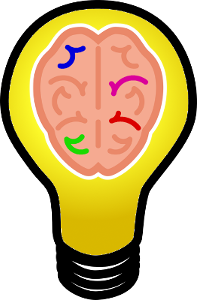 The mental process that leads us to think creatively is something that can be improved if we try to understand how it works. Even more if we consider that our brain has the ability to create and recreate neural networks during our lifespan (neuroplasticity).

For that reason it is very useful to know, even in a simplified manner, how our brain works. Throughout this article I will try to summarize those concepts which, for me, are the most important when we talk about the operation of our mind in relation to creativity.

We can define creativity as the mental process from which we arrive to a revelation (called insight) and obtain, as a result, a new concept or idea capable of adding value or solving a situation. A requirement to think creatively is managing to relate very different concepts to each other.

The manner in which the information is traditionally transmitted to us, including formal education, prepares and conditions us to structure and classify such information in our brain with well-defined attributes, categorize it by topic or concepts, in order to access it quickly when needed. This represents a benefit in terms of saving energy for searching information in our brain, as "paths" (neural networks) through which we come to that information, and eventually act accordingly, are marked in some way to easy access. However, this involves a problem when wanting to connect distant concepts, located in different "compartments" (those categorizations), because the road is not as well marked.

A limitation that we find throughout this process is that creativity demands a high energy consumption, compared to other more common activities in the brain. This conflicts with the fact that our body is programmed to conserve energy and use it more efficiently. Therefore being creative presents a challenge that we must attack actively.

Routine, and all those busiest neural pathways, are helpful to save energy but also can harm the creative process. This is why most creative thinking techniques involve breaking usual patterns of behavior or force the mind to think in non-traditional way by randomly associating concepts.

Several brain waves (electrical activity produced by the brain) are identified in our brain, on which we will mention three that concern us:

Some techniques to enhance creativity focus on promoting alpha waves through relaxation, which is not always associated with calm but also with a state of comfort and/or fun. In that sense the beta waves represent a "noise" that we tries to shut off, usually by cancelling the intense sensory stimuli such as sight (eyes closed) or hearing (being in silence, or listening to music). The latter can clearly be seen in situations where we try to concentrate by isolating ourselves from the environment and even losing his sight on the horizon.

It also happens that when we concentrate too much on finding a new idea, we are not allowing the brain areas that perform new partnerships to work. The symptom is perceived as being "burned out" or "locked" mentally. The solution to this situation lies, as is commonly assumed, in to separate from the problem for a while and clear the mind, or to incorporate the perspective of a third party who has an opinion without preconditions and allow us to add ideas not considered.

Humans beings are largely governed by emotions. Despite having the power of reason and logic, emotions still determine our behavior, and give us a framework (beneficial or harmful) for the formation of new ideas. Being calm, relaxed, happy or having fun increases the chances to have an insight.

By contrast, a stressful situation triggers in our brains primitive defense mechanisms prepared to deal with dangerous situations. This causes us to configure ourselves to react quickly and with high focus on the present situation, which inhibits the ability to broaden the spectrum of thought and find alternative and creative ways of solution.

Techniques such as meditation have been shown to stimulate the prefrontal cortex (associated with emotions), as well as reduce other areas associated with the processing of negative emotions, such as the amygdala.

There are many techniques to foster creativity or even to mentally prepare ourselves to face creative challenges. You can read about them in almost any literature about creativity or in the Internet itself. What I will do now is to discuss two practical cases that I myself have successfully implemented.

The first technique that I recommend, as simple and obvious as it seems, is to always have a notebook where to write the ideas that arise spontaneously during the day. During the course of it we are confronted with ideas that are manifested because we are in moments of relaxation, emotionally prepared, or in another state / environment that nurtures their generation. If we do not register them, many of them will be forgotten. For this reason it is very useful to always have a way to quickly record ideas that cross our mind. I personally, being a tech person, recommend any mobile application for taking notes, such as Evernote, Google Keep, Microsoft OneNote, or any other similar to those.

The other technique that I recommend, which is also extremely obvious and known, is Brainstorming. While it is a known method for generating ideas, it is common to lose the main goal: quantity / volume of ideas. Usually we incorporate the value judgment as part of the generation of ideas, which generates inhibitions in other members and, therefore, creates filters that prevent the generation of new ideas.

The objective of Brainstorming is to generate a great volume of ideas without judging them, and just record them. Each idea can inspire the generation of new ones by other group members. It is also important that a topic or thematic framework on which to generate ideas is defined. In other words, define what the problem or situation to be solved (creative challenge) is. In my experience it is vital that there is a moderator of the meeting, to ensure that ideas flow without restrictions and don’t lose sight of the creative challenge.

Of course, these techniques would be meaningless if the ideas generated are not revised, refined and transformed into achievable actions.

Our interest in creativity is not accidental, since it is thanks to it that humans have overcome great obstacles and have conquered great achievements and discoveries. Evolution itself tells us that it is one of our best tools to survive and thrive. Not only globally as a species, but on an individual and personal level creativity can be applied consciously.

Neuroscience continues to make incredible contributions that are helping to unravel many of the mysteries of the brain. Understanding how we function can help us realize the potential we have, in the same way that by learning how things work we can use them in a better way. And our brain is the best technology we have available.

Some of the sources used to create this article.